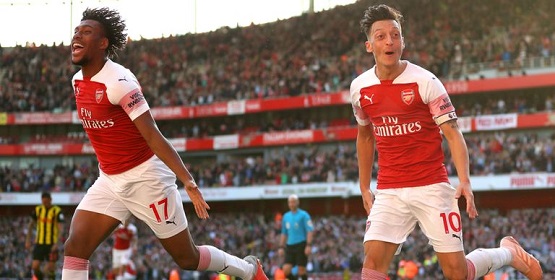 There is a saying that has never been truer than in modern football and that is no player is bigger than the club, a philosophy that some Arsenal fans struggle with.

Two players in particular at Arsenal, Mesut Ozil and Alex Iwobi have a hardcore group of supporters that refute all criticism of their favoured players and use every angle open to them to not only defend them but push a narrative contradictory to common sense.

Let us start with Alex Iwobi, statistics, age and yes, even his race is used to promote the idea that he is a great talent that is played out of position, not given enough opportunities, only 23 and worth an enormous amount of money while ignoring what is as clear as sunshine in front of you.

To some extent, the same applies to Ozil, he is not used correctly, he is not understood, he is the assist king, too many inferior players around and of course, there is his religion.

All this is well and good apart from one tiny little problem, we have eyes.

You see, these eyes that we possess see when Ozil cannot be bothered or when Iwobi has no end product, these eyes see that on a consistent basis these two players fail to deliver and based on their performances over the last couple of years are simply not good enough for Arsenal.

But their respective supporters simply do not see what the vast majority see, they show a passion that borders on cultism to such an extent that they are immune to how badly the players perform, it simply does not register.

But even when it does register you can take it to the bank that it is someone else fault, it will not be the fault of Ozil and Iwobi, no siree.

There is no reasoning with them and I can predict in advance the sort of comments this article will provoke, the sad thing is, the expected comments will actually prove my point for me.

But blind loyalty to a player is fine, I actually have no issue with until such a time that it starts to damage the club I love.

When that starts to happen then those defending the players, despite all the evidence to the contrary, are no longer being loyal to Arsenal, they are instead being loyal to the very people that have and continue to damage our club.

To see this any other way would be to ignore all the player ratings from all the newspapers, fan sites, Youtube channels, commentators and former players, they all read the game wrong see but Ozil and Iwobi fans did not, they all saw what we did not see, we are all wrong.

Some will call this a hatchet job, good, it is actually meant to be one and I will tell you why. Because someone has to do it.

Someone has to say enough now, these players are not bigger than Arsenal football club, they are not good enough, will not be good enough and need to go.