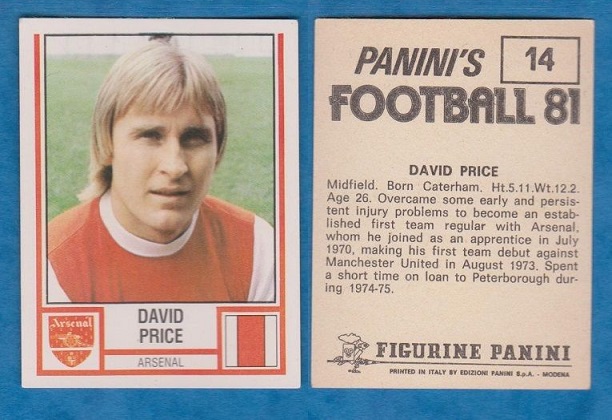 Where are they now? Arsenal’s much-under-rated David Price

WHERE ARE THEY NOW? GREAT PLAYERS WHO HAVE SEEMINGLY FADED AWAY by Ken1945

David James Price was born on the 23rd June 1955 and captained the England Schoolboys, while playing in midfield.

He signed professional forms for The Arsenal in 1970 and featured in the FA youth cup win of 1971, whilst being part of the Arsenal Academy.

His first appearance for the first team happened on the 9th May 1973 at the age of 17 against Leeds United, but it did not signal a regular place there.

In fact, he played in the reserve side for the next few seasons, followed by a loan spell at Peterborough United.

This served him well though, because in season 1977-78, he became a permanent fixture in the first team and played 51 matches that season. Compare that to the previous 13 since he joined the club and one can see that the patience of the club paid great dividends.

He also played in our 1980 Cup Winners Cup final defeat to Valencia, so it could be said that finals were not his most happy occasions.

When the Arsenal signed John Hollins from Chelsea at the beginning of the 1980-81 season, it signalled the end of his Arsenal career for David and in March of that year he was transferred to Crystal Palace.

David never won any England caps and he was a divisive figure amongst the fans – some seeing him as a very talented footballer (me included), while others saw him as a weak, easy to bowl over player back in the hurly-burly days of physical football.

When his career was over, David became a taxi driver in the Croydon area and, who knows, might have driven Jon Fox to one of his stage productions, or shared a cup of tea with Kenny Rolfe in a cabbies cafe?

I am not aware that David has ever been to the Emirates and, once again, a great servant to The Arsenal has, seemingly, faded away from the club.

Thanks for the memories and some of us oldies have fond memories of your style of play.