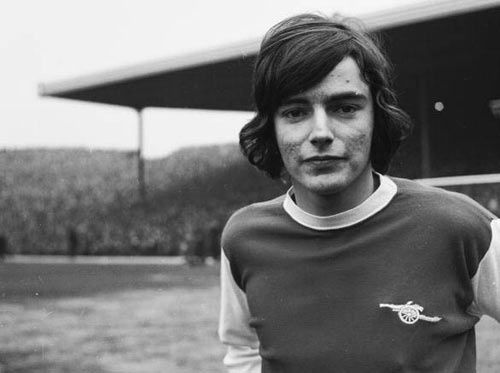 Where are they now? Arsenal’s wasted talent Peter Marinello

WHERE ARE THEY NOW – GREAT PLAYERS WHO HAVE, SEEMINGLY FADED AWAY. by Ken1945

Peter was born in Scotland on the 20th February 1950 and started his career at Hibernians, where his prodigious talent was getting rave reviews down south. After two seasons at Easter Road, the big clubs in England started to take notice of this young winger and some of the clubs interested in him were Manchester united and the Spuds.

At the time, it turns out though, Peter was more than happy to stay at Hibs and it was the club’s decision to sell him to The Arsenal – he says that he wasn’t really impressed with our club and thought Hibs were a better club all round.

He travelled down though and met Don Howe, who he says, handed him a second hand set of boots and told him to show what he had during a forty minute training game – it was at the end of this session that, allegedly, Don Howe said “You’ll do” and the bid went in.

At the age of nineteen years and eleven months The Arsenal decided to smash their club record and offered an incredible £100,000 for his services.

But Peter wasn’t so sure and decided to think about other offers before he finally decided to join our club, and went on and scored in his first senior game – against Manchester United – a superb solo goal that gave way to the comparison with a certain George Best – surely the most brilliant footballer from our shores?

Peter says “that was the worst thing I ever did, and I regret it to this day” but we all thought the club had pulled off the signing of the decade.

The good old media once again pounced on this young, talented Scotsman, judging him against George Best, not only in talent, but looks and his £100,000 price tag.

Peter remembers Don Howe being furious with him when he lost the ball and standing on the halfway line, hands on hips, waiting for the ball to be played back to him, while it was pointed out that “wee Georgie Armstrong would forage and run back!!!

His form started to dip under this kind of scrutiny and comparison, leading to a loss of form and confidence, seeing him play only three games during the double winning side of 1970-71.

Injuries were also hampering his progress, although he did play more games in the next two seasons, before he left for Portsmouth in July 1973, with a total of 51 games and five goals to show for that massive investment in him by the club.

However, I have always thought that this was the one player who The Arsenal could have supported so much more and my reasoning?

Well, Bertie Mee asked him on six occasions to reconsider his move to Pompey, so our club knew the talent was there, but the money he was offered by Portsmouth ensured he left our club.

Yet another decision he regrets to this day…why didn’t the club support this young, homesick, but oh-so-talented player more?

The bright lights of London, the lifestyle, the women who were always around and his home-sickness were never really addressed in my opinion, and our club must have known about his love for the above well before he signed.

The classic example? On his eighteenth birthday, his fellow Hibs teammates hired a woman of “ill repute” to rid him of his virginity – twenty of them sat around in a semi-circle cheering him on!!! Coming down to London must have been like a bee in a honeytrap to him.

His champagne lifestyle was always in the news and The Arsenal of that time (according to Peter) were a big drinking club, and he was always part of the clan that went out on nightly drinking sessions…other players of this time also acknowledge the drinking culture of course.

Disastrous business ventures followed, including buying a half share with Alan Ball in a racehorse called “Go Go Gunner” after he joined Portsmouth. Fellow footballers such as Frank McLintock, Charlie George and George Graham were supposed to buy in, but it never happened, according to Peter.

When he finally retired, after returning to play in Scotland at Hearts, he reflected on his footballing life as being good days, but life in general was a mixed bag of tricks. He is neither bitter nor regretful, simply happy to have lived to tell so many stories.

What a wasted talent from a Gooners perspective, he had everything and could have become such a powerhouse in football history – still.. as he seems to have no regrets himself, who am I to judge him?

He has certainly done many more things in his time than I have, including a semi-circle of men cheering me on as I lost my virginity (at least I can’t remember that happening)!!!!

Neither have I done what his final quote I am giving you says “I pi88ed my talent up against the wall” – probably because I never had any and didn’t have a wall nearby anyway”!?!?!?