Where does this potential Arsenal squad with six signings rank amongst our rivals? (Opinion)

Arsenal completed their second signing of the summer window yesterday in Albert Sambi Lokonga, and we are believed to be closing on a number of others at present also.

Ben White is believed to be all-but complete, with just his medical to be completed upon his return from holiday next week according to the DailyMail, while we are linked with adding a new back-up goalkeeper, a new striker to potentially replace Alexandre Lacazette, as well as a potential replacement for Granit Xhaka.

While I would love to throw Locatelli into the mix, I’m struggling to believe that Juventus will allow this one to pass them by, so I’ve stuck with Elneny for the purposes of the article.

One of Sam Johnstone or Aaron Ramsdale currently appears to be the most likely signing to come in as back-up ahead of the new term, as reported in the DailyStar, while our new left-back in Nuno Tavares has already joined the club, and has already made an impression by scoring on his friendly debut against Rangers.

Tammy Abraham may not be everyone’s favoured strike-target, and while I’m torn over who I would prefer out of him or Odsonne Edouard, the most recent rumours have been for the Chelsea striker, with The Telegraph amongst others linking him with the switch, and I believe he would relish playing in our current setup. 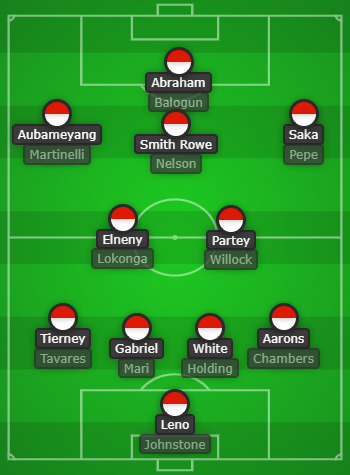 While this team isn’t quite complete, with another central midfielder and AM ideally needing to be added also, I’m feeling really positive about this team on paper putting in a serious challenge for the top four, especially without the pressures of having to juggle European football this season.

Is the squad already shaping up to be in much better shape than last season? If you could add just one player to the above squad, who would it be and why?