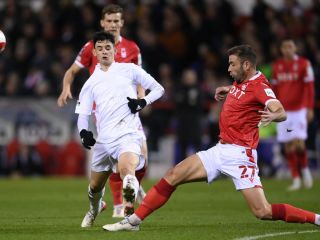 Darren Bent has tipped Ben White to take on responsibilities in midfield following a raft of absences for Arsenal.

The defender joined the club this summer from Brighton, and has already appeared at right-back, despite forming a formidable partnership at centre-back alongside Gabriel Magalhaes this term.

Our side was forced to name an inexperienced duo in Lokonga and Charlie Patino in the FA Cup clash with Nottingham Forest at the weekend, a performance which underwhelmed on a number of levels, but after the departure of Ainsley Maitland-Niles to Roma, on top of Mo Elneny and Thomas Partey’s international responsibilities, we have left ourselves short, and Granit Xhaka’s recent positive test for Coronavirus severely highlighted our lack of strength.

With little noise around a new arrival, we currently have a sweat on our options ahead of our clash with Liverpool on Thursday, and Darren Bent certainly wasn’t impressed by what he saw in the FA Cup, and is tipping Ben White to be used in yet another position.

Live on air, Bent was asked if he was worried about our current options in midfield, and he told the TalkSPORT listeners (as quoted by TBR): “A little bit [worried]. I never thought I’d miss Elneny but we did on Sunday. Ben White has played a holding midfield role so he might have to play there. When you look at the midfield right now, it’s worrying.”

I don’t quite understand why we have allowed Maitland-Niles to leave before a replacement has been brought in, or at least before Charlie Patino or another youngster has proven themselves ready to make the step-up, but that doesn’t mean that Patino didn’t just have a one-off either.

Against Liverpool we simply can’t take that risk however, and I expect Martin Odegaard to drop into a deeper role in midfield, possibly with Emile Smith Rowe also playing a little deeper in a 4-3-3 formation, but I can’t disagree that the current situation is a huge worry.

Do you think the duo of Lokonga and Patino could be tried again if no other options return to availability?

“One of the biggest differences to me is …” Pundit compares leading Arsenal and Man Utd stars
4 December 2021, 20:00