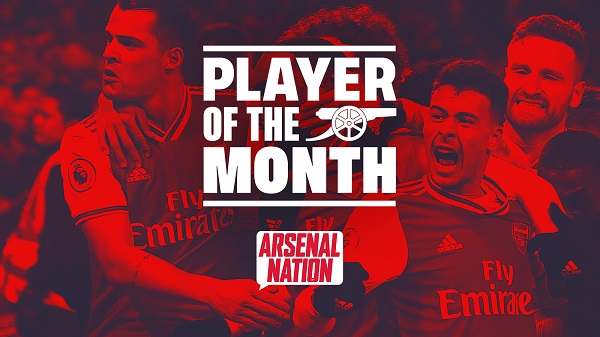 Who deserves to be awarded the Arsenal player of the month?

Who is your player of the month among the players listed on the official Arsenal website?

It is that time again where fans are asked to vote for their Arsenal player of the month. The opportunity for supporters to come out and say who has impressed them the most in the past month. The official Arsenal website has come out with a list of four players; who are all potential winners.

Lucas Torreira: The Uruguayan has proven himself to be a reliable player ever since his arrival at the Emirates. There is this charisma with which he plays. He is a hard tackler of the ball and he is good in attack. He won the player of the month for December and in all honesty, he deserved it. He is one player who has improved on his game and has made dropping him difficult for Arteta. Would you vote for Lucas again or would you rather vote for the next person on the list?

Bukayo Saka: With 14 Premiership appearances, 2 FA Cup appearances and 2 EFL appearances this season, Saka seems to be the player that has shone the most from Arsenal’s academy this season. He has 3 goals in all competitions to his name. Against Bournemouth in the FA cup last Monday, he scored a wonderful goal. It is a good thing he is on this list but the question is, has he done enough to win the January player of the month?

Gabriel Martinelli: The Brazilian wonderkid, who is beginning to form a deadly partnership with Saka, has all the stuff found in young, talented footballers. He has the pace; this was obvious in the game against Chelsea where he ran half the length of the pitch to score a beautiful goal. He is a good goal scorer and he is a good dribbler of the ball. With 21 appearances and 10 goals in all competition this season, the talented kid has done enough to win all the accolades he is currently enjoying. Is he your choice for the January player of the month?

Granit Xhaka: The player who divides opinions among the Arsenal fans, has deservedly found himself in contention for the January player of the month. He has really improved his game since the arrival of Mikel Arteta. He played so well against Chelsea; especially when he was used as an emergency defender, after the red card to David Luiz. He has had his issues with Arsenal fans in the past but based on how his game has improved recently, I am sure no Arsenal fan would frown at him being awarded the player of the month.