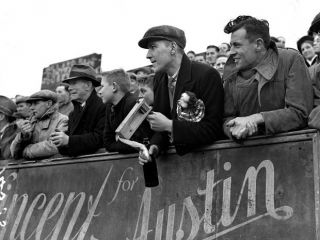 Who remembers the days when Football was moral, and fans were polite?

A golden opportunity to reclaim top level football from the corporate “thieves” and the part we all can play. Plus some nostalgia! by Jon Fox

Let me ask you good people some personal questions, if I may.

Do you consider yourself, at core level, a moral and decent human? On what evidence do you base your answer? Do you believe that fan bias gets in your way of being totally honest with yourself about your own club and about others? Do you feel helpless against the corporate power of the way that modern football is run? Do you think that a major change to that way is remotely possible if fans band together? And finally, do you think it your duty to fight for what you believe in, or do you not?

Without wishing to bore – but I’ll take that chance anyway- I have lived my 69 years since I was old enough to know my own mind at least, with a passionate belief, often bordering on arrogance and sometimes even being deliberately arrogant, that I could HELP achieve great things.

Having spent much of my working and social life around theatre people, who often have, shall we say, artistic temperaments, sometimes with brutal honesty but who also play mind games with the best of them (Fergie!!), I flatter myself that I know a fair bit about how human nature is, and how we work and what makes us tick. I can recognise a con merchant and a chancer, and know when people are in it for themselves, not for the general good.

That being so, it has long been a difficult decision for me to continue supporting a sport run by people and organisations I profoundly despise. Of course, I mean the football authorities, not the players and not the fans, who are by and large merely pawns caught up in a tsunami of gross greed that has overwhelmed and destroyed any pretence to morality the game once had.

And way back in time it DID have a great overall morality and was a force for good and healthy in so many ways, not merely physically either. When I was still a teenager, a great man named Sir Stanley Rous was our FA chairman and was widely respected throughout world football. He was a famous ex top level referee who had even refereed a World Cup final before the war. He sat beside Her Majesty the Queen when England won the World Cup at Wembley in 1966, a game I watched with wonder and pride. It was a great time, even a noble time, to be a lover of football, and my love of football and of our own mighty Arsenal, who had won NOTHING for thirteen years nor would for another four, was all consuming.

How easy it was to love everything about football back then! Players did not dive, though Francis Lee of Man City, an England international, was soon to be the first and best-known diver, in the late 1960s onwards. He was known as LEE WON PEN, because the papers would give the goals scored as Lee, one pen!

It was around that time that hooliganism came quickly into our game, ruining it for many and frightening away thousands of others. The authorities and police were at their wits end as to how to stop it and all these years later, despite all seater stadiums it is still with us, even though more controlled these days. Society was fast changing, with new aggressive attitudes to the fore, consumerism rife and the economy booming as people got richer, with more spending money and many of the old, now rather quaint but charming, customs being pushed aside. Back in the fifties and before, young boys were often passed overhead from the back of terraces down to the front by ordinary decent fans who wanted the boy to see a game he otherwise could not. My late father told me of how he personally had done this “child passing over his head” back in pre-war days, as a still young adult. All adult men wore caps, usually flat caps but also some bowler hats back then, and some would throw the hat in the air at a goal. You can still see these on old grainy footage of olden times and how I long that we had all those customs now. Scarves were knitted with wool, and without names, only colours, and we had bobble hats too of wool, with rattles and rosettes. It all seems so old hat now but it was a time when the game had sportsmanship in spades and fans were decent, working class and you could stand next to your friend or mate who supported, openly too, the opponents, and hooligans were still unborn or babies.

What has been the catalyst for so much change has been of course MONEY. And the love of money and still more of it! It has totally changed many things that were the norm and which we held dear, for the worse in many cases, though far from all. In case you wonder, I am NOT a left wing socialist, far from it!

In the next instalment, I will tackle the harm this excessive love of money has done to our sport and suggest how we can help to wind back the clock, now that this deadly virus has given us a great opportunity, if only we have the courage and will to grasp that opportunity. Following that, I will then explore our own attitudes to what we think is wrong or right with the game today.

Stay safe and have patience,