Who thought that Arsenal were going to sell Lacazette? 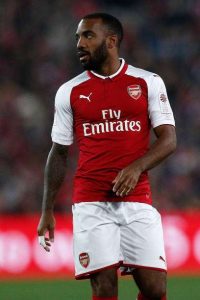 Well there is an interesting question, because it would appear that the Arsenal striker himself was worried that he would be surplus to requirements after we brought in Aubameyang last January. We all know that Arsene Wenger didn’t seem to trust the Frenchman but he was still banging in the goals when he was given the chance, and everyone knows that any real top team needs two star strikers anyway. I for one never considered the possibility.

But Lacazette revealed his insecurity when he told Arsenal.com: “When first I think of Arsenal, it was when Titi Henry played for Arsenal and scored goals,” he said. “Now I’m there so I want to make the fans happy.

“I signed for Lyon at 10. At seven they wanted me to sign but my dad said, ‘it’s too early, you need to learn with your friends and just have fun’.

“I needed the next step. A few years ago I talked with Arsenal but it was not a good time.

“When they came I was so happy and the discussion with Arsenal and the club was so quick, and with me it was so quick.

“I’m happy because I know now the league, I know my players, my teammates.

“The club is happy because this summer they didn’t want to sell me; they told me ‘we are happy to have you in the team’.”

He has certainly repaid our faith and has already scored six goals this season, while his partner in crime Aubameyang has got nine. But I find it hard to believe that he could even consider that we were going to sell him. We have the best partnership in the Prem!