Who would you choose as Arsenal’s Number 9 against Sheff Utd? 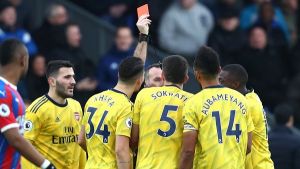 Mikel Arteta has to face the million-dollar question ahead of Arsenal’s trip to Sheffield United next week, after our top-scorer Aubameyang was sent off in the draw with Crystal Palace.

It is not going to be easy, especially as the obvious backup Number 9, Alex Lacazette, seems to have lost his scoring boots but is still our second highest poacher with 5 League goals to his name.

Arteta gave away no clues when he discussed losing PEA for the next few games. “We are losing probably the most important player,” said Arteta in Reuters.

“This is never nice but we have other players that can play in that position. We will try to find a way and be as competitive as possible.

“Hopefully [the other players] can take a step forward now that Auba is not able to contribute to the team with goals.

“Someone else has to do it and I want to see their reaction too.”

So, other than Laca, who else could he choose from? We have our most expensive signing Nicholas Pepe, who has not really settled into the speed of the EPL yet but may improve if given free rein in the centre of the park.

Or the young sensation Gabriel Martinelli, who has scored lots of goals too, but usually against inferior opposition in the cups.

Arteta could also decide to keep Nketiah at the Emirates and throw him in at the deepend on Saturday. Our new boss has already said that the 20 year old has matured at Leeds, despite not getting enough game time.

An outside possibility is Reiss Nelson, who scored a great poachers goal last week and is improving.

But if you were forced to choose our Number 9 against Sheffield United, who would it be?