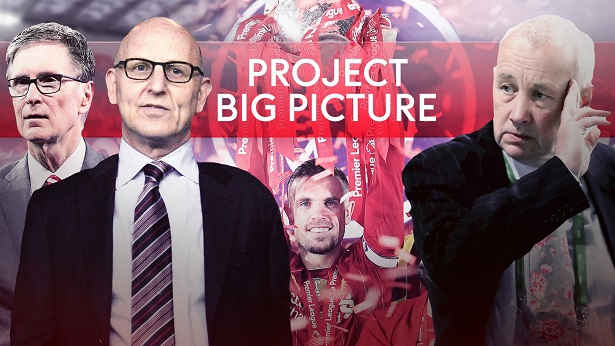 Why Arsenal fans should say ‘no’ to Project Big Picture

Say No To “Project Big Picture” by Dan Smith

So what would the proposal entail? Here are the key points courtesy of SkySports:

The Premier League would be reduced from 20 to 18 clubs.
The EFL Cup and the Community Shield would be scrapped.
Current one-club one-vote principle would be abolished, as would rule that 14 clubs out of the current 20 need to agree on policy.
Power would be in the nine clubs that have remained in the Premier League longest (Arsenal, Chelsea, Everton, Liverpool, Man Utd, Man City, Southampton, Tottenham, West Ham).
Only six of the nine longest-serving clubs need to vote for major change.
A £250m payment up front to the EFL, plus £100m payment to the Football Association.
25 per cent of Premier League annual revenue (up from four per cent) would go to the EFL clubs.

You know at Christmas how a loan shark might knock on the door of the elderly and the poor and offer them money right there and then. The recipient, too fragile to understand the extent of how much they will be paying back long term and the consequences if they fail. Well in this scenario, Liverpool and Man United are the loan sharks and I guess the EFL is the old grandparent desperate to afford presents this December.

The owners of English Football’s two most successful clubs have been working on a revamp of the Football League in what is being called ‘Project Big Picture‘.

The Chairmen of the EFL, Rick Parry has spent all weekend commending the leadership of the two clubs. Of course he has. It’s his job to do what’s best for the 92 clubs not in the Premiership.
At a time when some are facing extinction without matchday revenue and the government hardly making football a priority in terms of emergency funding, 250 million pound up front and a guarantee of 25 percent every year of broadcasting income is not a deal he can turn down. In terms of his job, it would be irresponsible not to say ‘Yes’.

He’s not in a situation where he can say No …..and Liverpool and Man United are well aware of that. They’ve got the poor man nodding his head to everything ….

Arsenal are not innocent either.

Officially as things stand, we have given zero commitment either way, but it’s believed part of the Champion’s action plan was to have the top 6 on board.

That will essentially become a big 9 with Everton, West Ham and Southampton qualifying for ‘special voting privileges’ due to how many years in the top flight.

This is where long term you see what the big clubs are trying to gain and if, like me, you hate change, it’s kind of scary.

As things stand, any changes to laws in the Prem get voted by all 20 clubs in the Prem with 14 having to agree for there to be a change in legislation. This new format being suggested would see the 9 clubs mentioned essentially have more control then their peers.

Essentially once in power, the status quo can ensure they remain the status quo. They can arrange their own broadcast deals, organise financial rules which suit them, even be able to veto takeover bids.

From a pure business point of view I get it. Liverpool got approx. 140 million off TV rights last year. Norwich, who were relegated, got only 40 million less. Which one are the majority paying their subscriptions for?

Yet that’s what’s always made English Football beautiful. The reason Watford can beat Liverpool 3-0 is that once in the Premier League, there’s integrity and a commitment to a level playing field.
If it was all about making as much money as possible, you could simply follow the Spanish model where Barcelona and Real Madrid have their own contracts, but long term you can’t then complain if interest in the competition dilutes.

If these clubs long term want to break away and have their own European Super League, etc, I hope they have checked how much their audience want to see it because I would suggest many supporters are getting pushed away. The idea of every summer 9 clubs having to bow down to 9 chairmen sitting at the head table is hard to stomach.

My attitude is’ if it’s not broken why try and fix it’.

John W Henry has done some great things on Merseyside without question. Roman Abramovich equally at Chelsea. Yet we can’t trust these people with the future of our national game. You are giving non-football people one of your most precious institutions and then you’re going to be shocked when they turn it into NBA?

Take the League Cup for example. That’s a competition introduced in 1960 and now the team that has lifted that trophy the most, decide they don’t care about it because they had a successful few years. So because they don’t like it and it gets in the way of their schedule let’s try and just cancel it?

My attitude is, if you don’t like the League Cup, simply don’t enter it. Yet the fact that you have the option of fielding your youngsters anyway, what’s the issue? Why do you think though, that the top 6 don’t just walk away? Because while they don’t want to play in it, they don’t want someone else winning it and taking one of their European spots.

From a finance point of view the argument will be that with the new deal, the EFL no longer need to bother about the added revenue of a Cup tie.

AND THERE IT IS… I’ve just given you a very Stan Kroenke or the Glazers answer. They will say that because they don’t love the sport.

Put the emotion into it …. Everton fans would love to lift that silverware this season.

Did you not hurt when Birmingham beat us?

In those moments, how many fans were thinking about finances?

We are going to swap that to have the rich become richer.

Make zero mistake, scrapping the cup, reducing the Prem, it’s not due to concern about players over playing. How would you feel if the League Cup was abolished and in that spare midweek, Man United took a quick trip to Asia to sell some merchandise?

Because that’s all this is. Helping brands grow – but not the actual sport. The only reason clubs have grown into that brand is the love of the sport.

Tell you what, if Mr Kroenke can name our entire squad, give him more power. Yet if you just read that and said ‘he can’t’, isn’t it scary that he could be about to become a major influence on how our game moves forward?