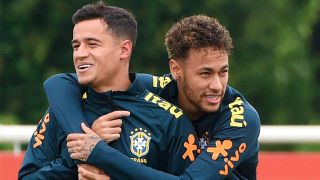 Why Arsenal target’s move to PSG makes much more sense

Arsenal have been linked with a move to sign Philippe Coutinho this summer, but Paris Saint-Germain looks a much more likely option.

Our club isn’t famed for splashing out huge amounts on transfers, and isn’t expected to have a large budget this summer either, despite calls for the new manager to backed in the transfer market.

Coutinho remains to be linked with a potential move to the Emirates Stadium however, with a loan with an option to buy touted as a possibility.

It has now been revealed that Brazil team-mate Neymar had bombarded Coutinho’s phone to convince him to team up in France, before he opted to join Barcelona instead, but his future has since become uncertain.

The former Liverpool forward has become surplus to requirements at the Nou Camp, and was even sent out on loan to Bayern Munich this summer, and the German’s are not expected to shell out the required fee to sign him on a permanent deal.

The 27 year-old is now being linked with a return to England, with Chelsea, Arsenal and Tottenham all said to be open to the idea, but PSG just makes more sense.

The French giants are believed to be struggling to keep the likes of Neymar and Kylian Mbappe happy in recent seasons, and the opportunity to take pressure off by pleasing the former with Coutinho’s arrival may prove a tempting prospect.

Whether PSG would opt to shell out the required fee to sign Coutinho permanently would be considered is up for debate, although a similar deal to the one Bayern took up could well be a possibility, that is unless the Catalan club are reluctant to business with Paris following the saga which saw Neymar join in the first place…

Could Coutinho turn down the chance to join Neymar at PSG? Can any of you really see the former Red in an Arsenal shirt after we supposedly enquired about his signature?

Pundit discusses former Premier League star and what he can do for Arsenal
4 January 2022, 15:30