Why Mari Is the One by AI

Gabriel Maghalaes is a physical phenomenon. Tall, strong and left-footed, he is exactly the kind of defensive prospect that Arsenal need at the moment. However, physical quality alone is not enough to be a good defender. There are other important intangibles involved. Unfortunately, this is where Gabriel falls short and has the most developing to do.

Communication is essential in defending. Football is a fast sport and the ball bounces everywhere. Organization is needed, and completely impossible if defenders do not communicate with one another well. This is why loud, organizing personalities are treasured among defenders. Gabriel does not yet speak English and cannot communicate well with Leno, Holding or Tierney. This is obvious on the pitch. In his debut, Gabriel failed to communicate well with Leno about a loose pass and we almost conceded a goal. Against Manchester City in the Carabao Cup, the Brazilian often charged out without making sure the space he was leaving behind was covered. And against Aston Villa, another failure to communicate led to the loss of three points.

There have been many other instances that have gone unpunished and under the radar and while the defense was still generally solid, it was not until Pablo Mari, a former City player who has spent time in Brazil and Spain, came in that our defense became one of the best in the league.

Pablo Mari also has good physical qualities. He’s tall, strong and difficult to get around. But he’s not the fastest defender and can be spinned around. However, that rarely happens and this is because Mari exhibit a trait of the absolute elite defender: controlled aggression. 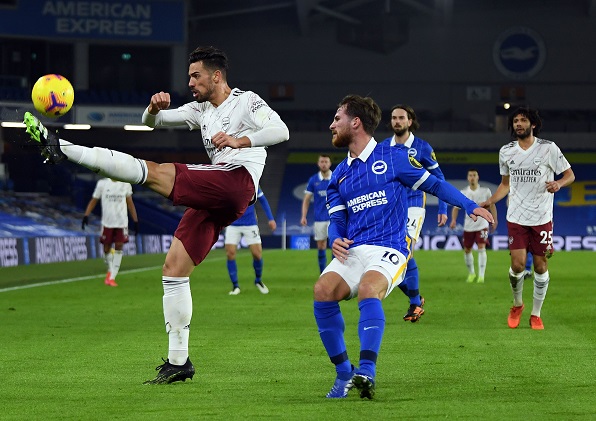 Controlled aggression is basically all about being patient and decisive, never diving into tackles too early, especially when an attacker is facing you and there’s space in behind. This is what Virgil Van Dijk is all about. Top centrebacks control space and employ their physical defensive prowess only at the right moment. They are methodical, patient, not falling for easy tricks. If they control space well, it is difficult for an attacker to get behind them, and in that way, a promising attack can be snuffed out of life.

Mari is calm and decisive. Whereas Gabriel overly relies on his physical qualities by quickly trying to win the ball, the Spaniard is a zonal defender, holding his position and forcing the attacker to make the initiative. This brings calm to the backline. Even if he’s beaten, the other defenders are aware of the situation because it is slowed down and predictable. Charging out headlessly means chaos: your partnering defenders have less time to cover if you don’t win the ball and are forced to abandon their zones, leaving even more space. Most Arsenal fans remember a certain German World Cup winner that was often guilty of this.

Apart from that, Mari can speak English, Spanish and Portuguese. He can communicate with anyone in the backline and organize better. His passing is also less aggressive and more patient. This is why our defense need Mari more than Gabriel right now.

Gabriel will become an even better defender over time but as of now, Mari is the one.

White explains how he and Gabriel work so well together despite their language difference
7 October 2021, 9:30