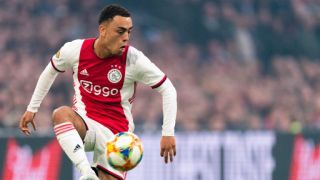 Why this Ajax youngster is perfect for Arteta’s philosophy

Mikel Arteta is believed to be keen on adding an inverted full-back this summer, and Ajax’s up-and-coming Sergiño Dest could well be ideal.

The 19 year-old is already a full international for the USA after an impressive breakthrough season in Holland, where he has picked up 15 league starts so far this term before the disruption.

Dest used to operate as a winger in his younger days, but has since reverted to full-back and hasn’t looked back since. Much like Saka, the youngster is fully adept in helping out in attack, but the Ajax star is equally adept at coming into the middle as he is to flying out wide in attack.

New Arsenal manager Mikel Arteta is believed to be keen on adding a right-back who is more than comfortable to slot into midfield when the team is attacking on the left flank, and Dest is more than capable of fulfilling such a role.

There are currently question marks over the future of Hector Bellerin, who is said to be of interest from Italy and Spain, but Dest’s arrival could be as an alternative option to the Spaniard, with Hector the better option defensively at present.

Ainsley Maitland-Niles however could be set to leave the club, having told Arteta that he was unhappy with being played out of position, and Dest could be the ideal replacement for him however.

Cedric Soares could change our transfer plans in the coming months however if he was to manage to impress manager Arteta in the remainder of his loan. The Saints defender is available on a free transfer this summer, and with funds believed to be tight, he may well get the nod.

Should Arsenal go all out to sign the Ajax youngster? Would a move for Dest rely on Cedric Soares failing to impress in the remainder of his loan deal?

Setback for Arsenal as Chelsea linked with full-back signing
30 December 2021, 14:45