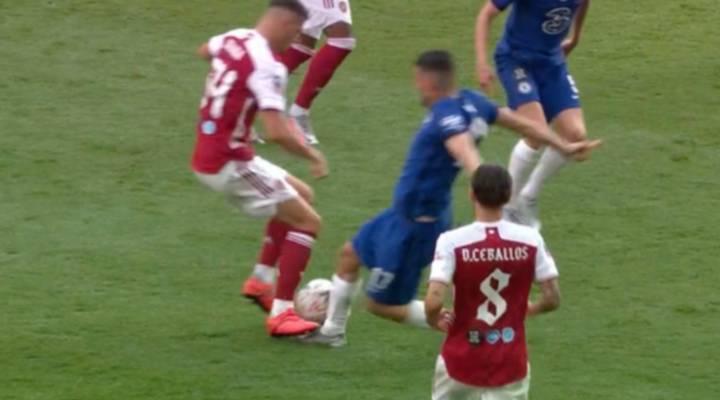 Referee Anthony Taylor sent Mateo Kovacic off during Arsenal’s FA Cup final victory over Chelsea yesterday for a second bookable offence, but the broad belief is that VAR would have overturned the decision.

The Croatian was removed from the pitch with the Blues already trailing in the tie, but due to the rules on VAR currently, only straight red carded decisions are permitted to go to the Video assistant.

Former official Keith Hackett is also of the belief that the second yellow was an error.

Hackett wrote on his Telegraph column: “In the second half, with Arsenal leading 2-1, Chelsea had Mateo Kovacic sent off for a challenge that the referee Taylor mistakenly decided deserved to be punished with a yellow card, the Croat’s second of the game,” he wrote in his Telegraph column.

“In my view, you could not describe it even as a foul on Granit Xhaka and, at worst, the challenge was careless as opposed to reckless. Which meant that it certainly should not have been a booking.

“Television viewers and no doubt Stuart Attwell, the Var, would have agreed on watching the replay. But Attwell could not call for a review because a Var intervention is not permitted for a yellow card.

“The rule takes its lead from the disciplinary process, which similarly prevents clubs from appealing against bookings. This incident showed that on this point the law falls down, however.

“The Var should be empowered to highlight a mistaken second yellow card. The technology is there: let’s use it as best we can. As it was, the FA Cup final is a huge game and the decision had a significant impact on it.”

Whilst I can agree that the second yellow was wrong, simply changing the rule to allow VAR to step in to be used on all yellow cards may well have to come in, but they are trying their hardest not to allow the technology to stutter the run of play.

Do we expect any major changes going into the new season when it comes to the use of technology? Will the FA look at Kovacic’s dismissal as a staple for change?