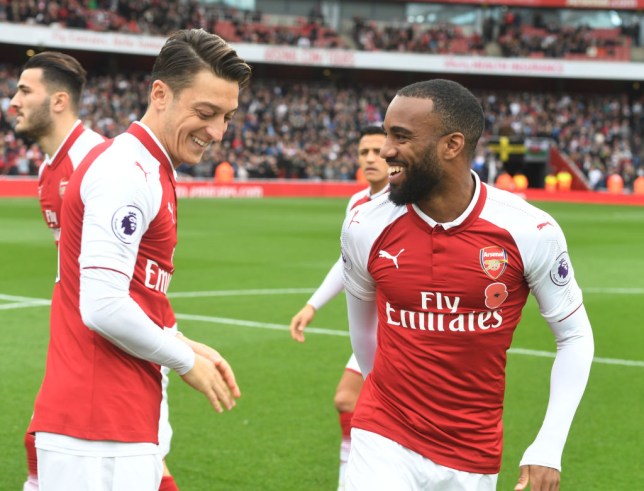 Will the critics now get off Mesut Ozil and Alexandre Lacazette backs?

Mesut Ozil and Alexandre Lacazette both got on the scoresheet against Newcastle United in 4-0 win.

In fairness to Ozil, that jibe at the haters was on Lacazettes Instagram account but the picture was of both the German and Frenchman so no doubt he shared the same sentiment.

Nothing wrong with one expressing their relief when they have done their job, but haters?

Now, I am sure they did not mean every single Arsenal fan that pays to watch them in the stadium, pays TV subscriptions to watch them, buys the kit and any other Arsenal merchandise that dared to question them for taking millions from the club and not doing what was expected of them.

No doubt that haters comments were aimed at the media. Well, if you want to give them the benefit of the doubt that is.

But back to the question of this article “Will the critics now get off Mesut Ozil and Alexandre Lacazette backs?”

In my opinion, Yes, when they are doing their jobs but if they do not, then no. Fairly simple really.

If anyone feels that goals and assists in one single game are enough to wash away all the poor performances that have gone before then they can think again.

Ozil played brilliantly yesterday, he was sublime and masterful and fully deserved the nine I rated him, it would be hateful and spiteful not to acknowledge that and every genuine Arsenal fan will recognise what he contributed against the Geordies.

If the German continues with that level of performance then you can take it to the bank I will be his strongest defender and upcoming articles will reflect that. However, if we get the usual Ozil back then that will be reflected upon and written about, that is how it works.

Same with Lacazette, he was on just a few minutes and made an impact and no one with normal human emotions could not have ignored the look on his face when he scored and not feel huge relief for the guy, I certainly did.

If Laca continues scoring at a decent rate then, of course, he deserves a regular first-team spot and the loudest possible support but if he does not, then the “haters” have every right to demand he be dropped and Gabriel Martinelli or Eddie Nketiah be drafted in.

Yesterday was a brilliant day to be an Arsenal fan and long may that continue, hopefully, Ozil and Lacazette will make us all proud on a consistent basis.

No one wants to be a critic of any Arsenal player but no one enjoys seeing the team fail to win 19 out of 26 games either.

Arsenal fans are a very forgiving bunch, look at the treatment both Mustafi and Xhaka have had in the past and now look at how they are applauded.

If the lads do well the critics will shut up, if they do poorly then they will be criticised. It is not rocket science.