Will this be Arsenal’s first-choice XI this season? Choose yours…

Arsenal currently have a number of players sidelined, and have had to field makeshift defences so far this term, but what would be our favoured XI with all our players fit?

Our goalkeeper is currently deemed to be Petr Cech, but I wouldn’t be disappointed to see Ospina overtake him in the pecking order, if on merit alone of course.

Our best trio at the back is harder to figure out, although my preference would be to see Monreal fielded alongside Rob Holding and Laurent Koscielny, although Shkodran Mustafi should have a good enough understanding of his team-mates now to warrant challenging Holding or Monreal for his spot in the side.

The next four are a little trickier to pick, although I’m of the belief that Hector Bellerin and Granit Xhaka have earned their starting spots. Santi Cazorla would likely be playing alongside him if he returns from injury at some point during the campaign, but Aaron Ramsey and Elneny will have to battle it out in his absence. I have the feeling Elneny is perfect to partner the Swiss international over time, and feel he will bench Ramsey in the long run. The left wing-back role looks likely to be Sead Kolasinac’s in the long-run, although Alex Oxlade-Chamberlain has impressed in the role, and is keen for regular action.

The rest of the roles are rather easy to select, with Mesut Ozil, Alexis Sanchez and Alexandre Lacazette posing as our club record signings, and all posing as important players for our side. The question remains as to whether we will keep both Ozil and Alexis at present, but both will certainly be starters should they stay 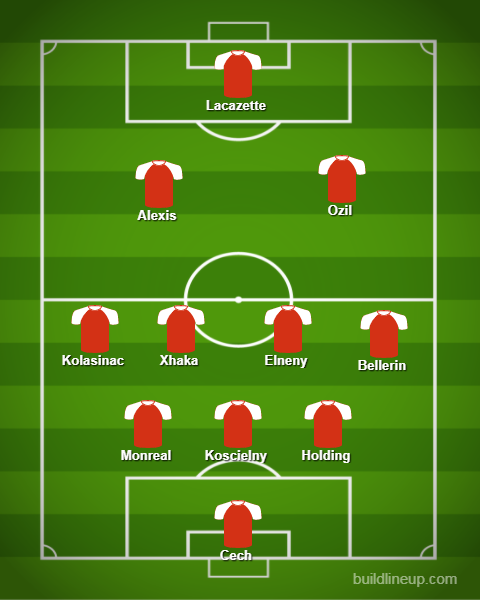 Will the above be our first choice XI for the big games (injuries dependent)? Or would you pick a different line-up?