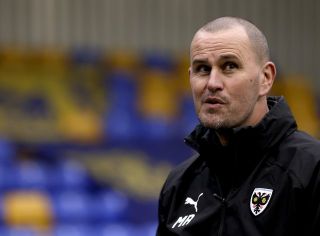 AFC Wimbledon boss Mark Robinson insists that he will not tell his players to divert from their attacking style of play when they face Arseanl tonight.

The Dons will make the trip to the Emirates tonight for their EFL Cup clash with the Premier League giants as they look to cause an upset and earn a place in the fourth round of the competition.

The Gunners will have other ideas however after making a statement in beating West Brom 6-0 in the second-round of the League Cup, and assuming Robinson is being honest in his comments, this could well end up being a similar scoreline.

The Dons’s head coach claims that he will not deviate from his attacking style of play tonight, and that should play into the hands of the superior side, who will already have been huge favourites to win at home against the League One team.

“There is no point,” said Wimbledon’s head coach. “If I change the style of play, I am telling the players that they’re not good enough – and that’s the last thing I ever want to be doing.

“Everything will be the same. We still want it [our preparations] to remain largely about us. Obviously, they will throw up some different challenges to possibly what we would face in League One football – of course they will. But we want the bulk of the preparation to still be about us because that gives us the self-belief to go and perform.”

Could Wimbledon really cause a shock by coming out and attacking Arsenal?