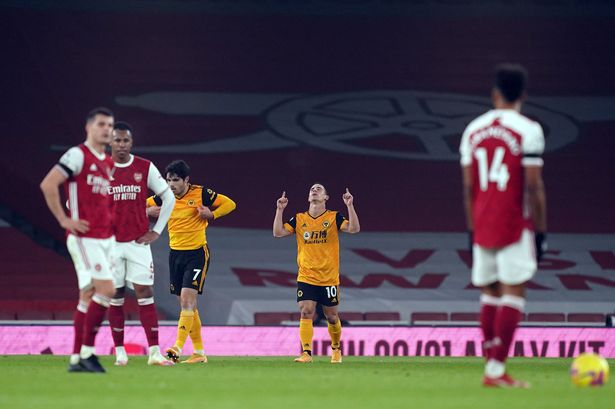 Wolves are in a very bad place at the moment as they are without a win in their last seven games, and it is a place that Arsenal fans can relate to as the Gunners went through a similar disastrous run of form before Christmas.

We managed to pull ourselves out of our slump by beating Chelsea on Boxing Day and have not looked back since. The fact is that we were not an awful team in our bad times, we were just unconfident and unlucky, and the Wolves midfielder Ruben Neves feels just the same about Wolves position right now, but he makes it clear on their official website that they are aiming to beat us tonight: “They [Arsenal] are in a very good moment, but this is the Premier League and this season we’ve seen some results that were not expected. We’ll face the game as always. Even when we lose, in the moment we’re going through, we do our best to win.

“Things are not going well, but we are giving everything we can to get points for the club. It’s not going to be different against Arsenal, we’ll go to the game to win, and to play how we want to play and show everybody that we’re still here and want to do something.”

We all hope that Wolves don’t turn their form around this evening, but Ruben says this is not the first time they have been in this position, and they have survived before. He continued: “We know where we are, but I think it’s important to know that when we did two great seasons the last two years, we were not the best, so now things aren’t going well, we’re not the worst. We need to improve, but mainly we need to be humble and put our heads on what matters – try to get out of this moment as quick as we can.

“We’ve had bad moments in the past, in the first [Premier League] season seven games without a win and last season we didn’t start well, but now it’s the most difficult time we’re going through. We still have great quality, a great squad, a great club with a lot of ambition, and we’ll do everything we can.

“That’s the only thing I can promise, and my team can promise, we’ll do everything we can to get out of this moment as quick as we can. We are working on that and that’s our main goal at the moment, bring our confidence back and start winning games again.”

To be fair though, even if Wolves do suddenly improve, there is no reason why we can’t beat them. We are one of the moost in-form teams in the League right now, and we can beat anybody!