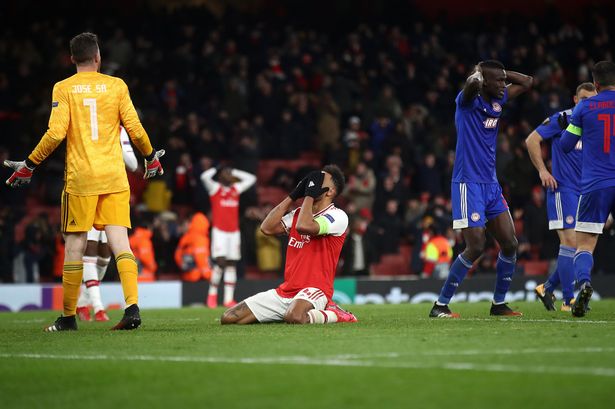 Would Aubameyang really do a ‘Van Persie’?

Manchester United are claimed to be eyeing a move to sign Pierre-Emerick Aubameyang this summer, with us resigned to the fact that he would unlikely sign a new contract with Arsenal.

The Gabonese striker has been highly consistent in finding the net since joining from Borussia Dortmund two years ago, but the club has struggled to challenge for the Premier League title in that time, nor have we qualified for the Champions League since his arrival.

Aubameyang is supposedly of interest to Barcelona, who are said to have made their interest known in January, but we were not in any mood to discuss such a deal.

Manchester United are now claimed to be eyeing a cut-price £35 Million deal this summer, which reminds me all too well of the Robin Van Persie deal a few years back.

The Dutch striker told us that he would not be signing a new deal as he neared the final 12 months of his contract, and we agreed to sell to United for a measly £22.5 Million fee, and then had watch him fire them to the Premier League title that very year.

Times have changed however. Manchester United are no longer the giants that they once were, and while they are financially stronger than most in the top tier, they just can’t make it work on the pitch it seems.

They are on course for Champions League football this term, but only due to the fact that Manchester City are to be banned next season, and not because they are a shoo-in for a place in the top four.

They haven’t challenged for the PL title, nor the Champions League latter stages for some time, and you would have to admit that a move from Arsenal to United now could only be about money.

If reports that Barcelona are interested, then it has to be a no-brainer, but if PEA is simply eyeing one more paycheck before he retires, then maybe there is hope for a United move.

Could Aubameyang really quit the Emirates to join United on a bigger contract? Is there anything about the Red Devils that could persuade him to join other than money?