Would this realistic Arsenal XI of 2021 challenge for honours?

Arsenal are being linked with a number of players this summer, and while you would like us to sign players like Thomas Partey, Dayot Upamecano and Ousmane Dembele, I just can’t see our club over-spending this summer.

The financial implications of the recent suspension of football will most likely see a number of teams looking at value alternatives in the coming window, and I believe we could sell some players in order to free up funds.

Lucas Torreira and Alexandre Lacazette could well be on their way out of the club, and should raise somewhere between £50-70 Million for our kitty this summer.

If that was our total budget, I would quite happily use the majority of that to sign modern forward Rodrigo Moreno, who is believed to be available this summer. The Spaniard is an all-round striker, dropping back to get involved in the build-up play, and brings the best out of those around him, and could be crucial to helping us reach the next level.

Ryan Fraser and Willian are both available on a free transfer, and with a number of clubs also expected to try and penny-pinch will likely come under a number of offers, but I strongly believe the Scottish international was keen on an Emirates move last summer, and a small move across London for the Brazilian makes a whole lot of sense to me.

Personally, whenever I have found myself watching Chelsea, it is Willian who has always stood out as one who never stops running and working for his team, and you will very rarely catch a glimpse of him losing the ball at his feet.

The only other signing who I would put straight into the first-team line-up is Emi Buendia. The Norwich City midfielder will likely be a bargain this summer should the Canaries drop into the Championship.

The Argentine is the main outlet for his club, much like Jack Grealish is for Aston Villa, and while he hasn’t scored a single top flight goal this term, does have those scoring boots in the locker room too. Unfortunately he is the main creator, and he can’t feed himself the ball. 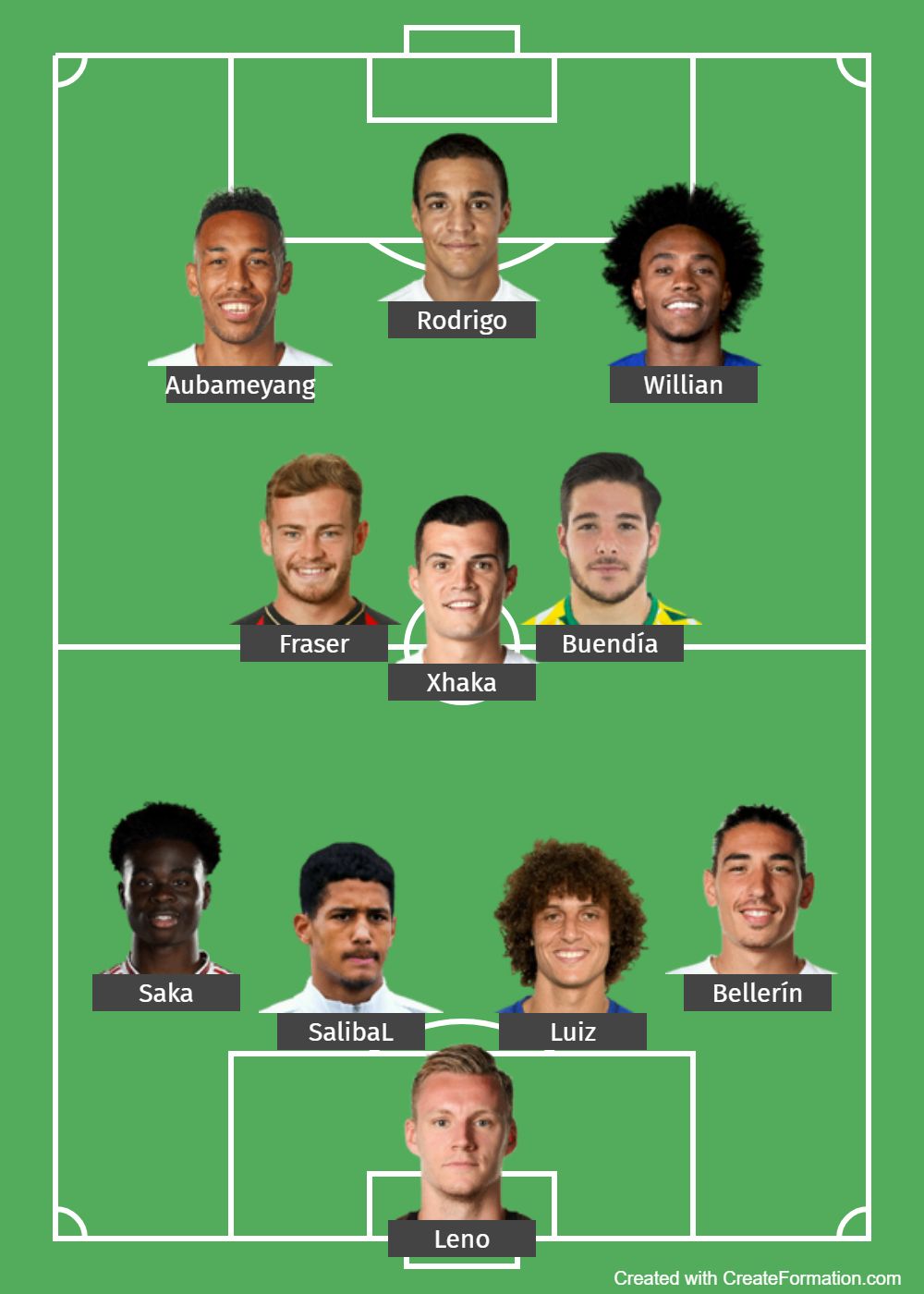 While Arteta’s new philosophy has brought the best out of a number of players, he definitely needs some more hard-working and creative individuals added to the current squad, and I would quite like Pablo Mari and Mykola Matvinenko signed to replace Shkodran Mustafi and Sokratis to boost our all-round defensive options, with David Luiz in the latter stages of his career.

This defence and midfield has plenty of creativity about it, and with a striker who would work for those around him, this should represent a recipe for success, although a huge chunk of our goals scored would be lost should Aubameyang decide to quit the club of course.

Would the pictured XI be able to challenge the better teams in the division? Would you prefer the cheaper option of Odsonne Edouard over Rodrigo Moreno?

Arsenal v Lyon Review – Easy win for the Gunners
Confirmed Arsenal team to take on Lyon in Dubai – Nketiah leads the line
Couldn’t Arsenal use Ronaldo’s ego (and experience) for our benefit?