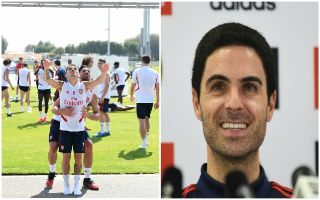 Lucas Torreira looks set to quit Arsenal this summer, but why has Mikel Arteta not been able to work with him?

The Uruguayan international arrived in 2018 and quickly became a fans favourite in North London, starting 24 matches in his debut Premier League campaign.

During his first season at the Emirates, the DailyStar amongst others were claiming of Barcelona and Real Madrid interest in his signature, but since the arrival of Mikel Arteta, he has been selected to start in only seven PL fixtures.

The Spaniard’s arrival as new Head Coach back in December saw the levels of our players increase significantly, and the results followed, but why did such a talent in Torreira not profit from this?

At 24 years-old, the midfielder is far from the end of his career, and given the ability that he had already shown under Unai Emery, you would have expected him to fill his boots in an underperforming midfield.

Mikel Arteta however looks to have decided that our #11 is surplus to requirements, seemingly overlooking the potential and strengths of Lucas, and SkySports claim he is closing on a return to Italy with Torino.

We are believed to be trying to raise funds for a move to sign one/both of Thomas Partey and Houssem Aouar this summer, and while both are exceptional talents, I can’t help but look back on Torreira first season and think we have gone wrong somewhere along the lines.

I’ve not heard any rumours of a conflict of interest, or issues between the manager and player, so where did it all go wrong for Torreira? And would his supposed departure highlight that not every player, despite his potential, can profit from the Arteta philosophy?