Yet more proof that Kroenke has little interest in Arsenal

It has been reported in The Sun today that our own owner Stan Kroenke has put not one penny into the club over the past five years. Does that come as a surprise? Nope not one little bit!

The money we have been getting has reportedly come from the clubs earnings over that period. So no wander now that we are in a pandemic, we are struggling to make ends meet with regards to transfers and player contracts, because the club isn’t earning any match day revenue, which I’m assuming would be the place that the earnings would mainly come from.

If it were reported that he did put money in, I think many of our fans would be in shock right now! As we are known as being a team that does not really splash the cash like other teams, it is no wander! No backing from the men above and no funds. What exactly are we getting from Kroenke but a headache?

Kroenke’s lack of support and spending has been the reason that many fans turned on the club over the years, in particular turning on Arsene Wenger when he was nearing the end of his time at the club. But even at the time, the most loyal Arsenal fans were aware that his plans and wants for the club was not in his own hands. Making it clearer now that some players had left because of the lack of leadership from Kroenke. Not once did I blame Wenger, but it was sad to see fans turning on him and protesting for him to go when they didn’t see the actual picture of Kroenke being the fault for our demise.

As the below report from Swiss Ramble shows, Stan Kroenke has invested zilch into the club over the past few years. But although we had no money coming in we made £101m of payments, which was a £40m debt and an interest of £61m, also having to pay KSE which is one of Kroenke’s many companies £6m for ‘advisory services’. So we are fine to pay him and his companies but he cannot give us anything.. 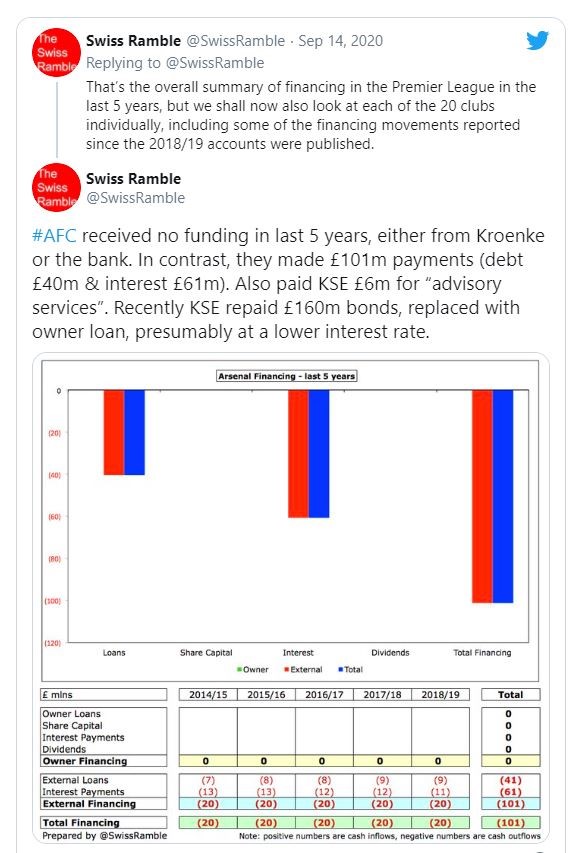 As if we didn’t know that we are nothing but a mere little business for Kroenke it had to be splashed all over the news too.