Sheffield United interim manager, Paul Heckingbottom, says Arsenal is where they deserve to be at this stage of the season.

The Gunners have had a troubled campaign that has seen them languish in mid-table for much of it.

With just 8 games left to play, Arsenal is tenth on the league table and their next match is against relegation bound Sheffield United.

After winning the FA Cup and making a fine start to this season, the Gunners are having a tough time and was expected to be in a better position at this stage of the campaign.

Mikel Arteta’s side is clearly underachieving and Heckingbottom agrees with that assessment, but he says they deserve to be where they are because of the efforts they have put into the season.

“You can say that but we are at the stage of the season where you are where you deserve to be,” he said via Football London, when asked if Arsenal were underachieving.

“You have seen in their games they can really open you up – there have been questions, there are moments when they can blow teams away, we have to try and make them not be that good and play on the back foot while keeping an eye on those players they have who can produce a bit of magic and take a game away from you.”

Sheffield United is almost certain to get relegated and Arsenal cannot afford not to beat them when both teams meet on Sunday. 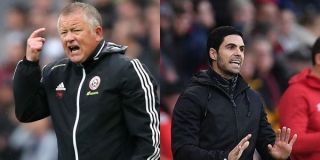